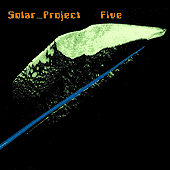 
The sound that is achieved is remarkable and the lyrics varied, it's quite prog rock/experimental in it's own way and an excellent job has been made. Musea keep coming up with these little gems.

Prologue. I have never listened to Solar Project (I haven't even heard about this band) until now. But, as mentioned in the booklet of the "Five" CD, there are four albums more in the band's discography: "The Final Solution", "World Games", "The House of S. Phrenia" (Schizophrenia, clearly), and "In Time". Since these titles follow one another, it's obvious that Solar Project's debut album is "The Final...", etc. So, this album was titled as "Five" not accidentally or with some 'conceptual purpose', especially since there are just four elements in the nature recognized universally. Really, it would be better (and simpler) just to forget that some scientists are sure that there is a fifth element in nature that's called Plasma, let alone an endless search for all the other fifth elements by Earthly cinematographists. Especially since the conception of "Five" is devoted to exactly the four "classical" elements, but not to five. And then, just looking at the album's title, it should be clear that this is Solar Project's exactly fifth album - even dissembling the band's discography on the booklet's backside. Well, I see it's time to say sorry for my pseudo philosophic verbiage, but it is happened just because I've had enough reading philosophic quotations and lyrics concerning the four elements in the album's booklet just before writing this review. Finally, being so tired of (doubtful!) comparisons, I am now going to use them myself. (Hey, and what about the applause?) However, comparisons I use in this review are obvious, and you dear Prog-lovers may always check it.

The Album."Five" is one of the most wonderful musical journeys through the spaces of time (or through the times of spaces, if you wish) you (and myself) ever made. Either flowing fluidly one into another or with varied noisy effects among them, all the six (I see, at least numerically I move forward since about "four" and "five" I've been talking just now) album's tracks filled with such a musical atmosphere that arouses the sensations of touch to some unearthly spheres despite the distinctly earthly lyrical conception of the album. Similar feelings I had when I listened to Pink Floyd and Eloy. But, if I hear that the way of composing of Solar Project's "Five" is moderately influenced by Pink Floyd, it has practically nothing to do with the music of their compatriots Eloy. Listening to "Five" I hear that a very specific sound of some electric guitar solos was borrowed from "Animals" (Pink Floyd-1977: in my view this is one of the most unique albums in the history of Rock Music yet one of the most underrated ones: it was just not properly understood actually), on which an ingenious sound of a 'crying guitar', invented by Gilmour, appeared in the band's creation for the first and, alas, for the last time. Regarding the guitar solos on "Five", they have just that unique sound sometimes, whereas almost all their parts were composed, arranged and performed by Valet originally enough to compare them to anyone's. There are a lot of different (and diverse) guitar parts on "Five" in general - from heavy riffs to rapid solos which Pink Floyd did never use in their music. There are the few more episodes on "Five" that will remind you of Pink Floyd. None of these themes, however, were borrowed (let alone the word "stolen") - they've just been composed and arranged in the vein of Pink Floyd. Well, it's time to finish talking about why I rated "Five" just with stars whose number is equal to the album's title. So let's begin talking about why this album is Excellent (yeah, with the capital letter at the head of the word). More than two thirds of the "Five" album's playing time (i.e. almost an hour) is wonderful, highly original music with lots of new ideas, very interesting and quite complex arrangements. I am amazed at the band's capabilities to build a complexity of compositions (and thus, a necessity of repeating listens to the album to comprehend it) with the help of... nuances, lots of which are hidden here and there on "Five". Wonderful Eastern landscapes - with meditative passages of the sitar among a wide-variety of other specific sounds most of which appear just with fingering change with bombastic arrangements typical for Classic Symphonic Rock. Heavy, mostly guitar based structures as suddenly fall into the void as the odd and as if incomplete yet hypnotically charming melodies slowly rise from there. A powerful, diverse, beautiful singing (especially by Sonja Mischor) ends with the explosion of Supernova. An endless search for where we are in the Universe...

Summary.Although I said that there are no similarities between the heroes of these lines and Eloy lots of the fans of this German legend will love Solar Project's "Five" (at least, as I haven't heard any other album by the band) to death, as well as a myriad of Pink Floyd lovers . Only some crazy diamond's purists could resist such wonderful and original (with those few exception I've mentioned above) music, especially since this is a kind of music they really love. Of course, all the other more or less experienced Prog-heads - at least from among those into Classic Progressive - fall into the category of Solar Project's potential audience, too. Thinking of Pink Floyd's phenomenon (practically, this band is the only 'progressive example' that was (still is?) in the mainstream at least up to their latest studio album "The Division Bell"). I wonder which would be a number of Solar Project's fans if the "Five" (and others, most likely, too) album was distributed by "EMI", and the band would be able to do shows at least (sorry for the tautologies - I am not Englishman, oo-ouch...) as Pink Floyd did in the end of the 1970?