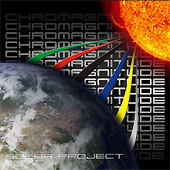 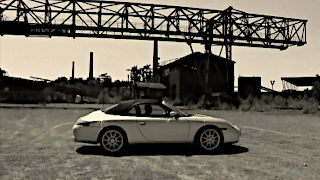 Although the roots of German band Solar Project have been around since 1981, originally under the name Solar System and since 1990 as Solar Project, and Chromagnitude is the band's seventh album, I have never come across the group before. The group is based around the three founder members of both Solar System and Solar Project, namely Volker Janacek (drums and vocals), Peter Terhoeven (guitars) and Robert Valet (keyboards). This core trio is supplemented on this album by Sandra Baetzel (vocals and saxophones) and Sebastian Jungermann (bass). The band make no bones about being influenced by Pink Floyd, having contributed to several Floyd tribute albums, even tackling the 23-minute Echoes on one of them! However, that does not mean this album is Floyd-lite. Instead we are precented with a concept album exploring the "psychological power of colours", the seven tracks themselves being named after colours, the music and lyrics displaying the positive and negative aspects of each hue.

The album starts with the shortest track, Gray, and despite what I wrote above it starts in a very Pink Floyd manner, with a Gilmouresque guitar sound straight from Signs Of Life off the A Momentary Lapse Of Reason album. Expressive Hammond organ backing the twin vocals of Janacek and Baetzel leads into a brief sax solo which fades out as the sound of insects leads into Green. According to the lyrics of White, green is representative of poison and fortune, as told in the lyric when the lush green paradise turns out to be a fetid environment (and kudos to Rob Valet for including undoubtedly the first ever use of the world trypanosomiasis [a parasitic disease] in a rock song!) The vocals take up the first four-and-a-bit minutes of the song leaving 11 minutes of instrumental kicking off with a keyboard solo before a wonderful guitar/Hammond section that could have come straight out of the glory days of Deep Purple. Taking a leaf out the Echoes book, the track mutates into discordance before playing out in a more spacey style. Red (fire, hate and love) starts in a more sedate and melodic style with the two vocalists combining to good effect. The pounding bass seems to herald an abrupt change in style but the band restrains itself using the various instruments to creation sonic structures before the final verse takes us back full circle to the style of the song's beginnings.

Black (evil, dignity) continues the sedate pace with an atmospheric solo guitar introduction. Vocals are handled by Baetzel alone who does an admirable job throughout. About a third of the way in the pace is intensified with an incessant bass and drum beat and a growling Hammond organ that blasts through everything in an extended instrumental break. Eventually the guitar joins in to reintroduce the melody before abruptly ceasing for the last verses of the song. Finally, a double-tracked guitar draws the song to a close. Blue (distal, faithfulness) is rather more languid with Janacek taking the vocals on the verses and Baetzel on the choruses. More like a Rick Wright solo number than anything specifically Floydian, the song is lifted by a great saxophone solo midway through. The insects are back on the intro to Yellow (gold, greediness) which is percussion heavy, the melody defined by the vocals. A talk box guitar followed by normal guitar changes both the tempo and style with a more eastern approach. Don't know if it is just the influence of the colour but the whole piece conjures up images in my mind of a desert, which is obviously what was intended given the lyrics of the second verse! The song ends with a much more energetic freakout by the group, which given the preceding lyric ("Do not follow the lure of oil, and then appears the desert storm") is obviously a musical political comment on recent events in the middle east. Last up is White (bright, heavenly), the most lyrically intense song on the album. All of the preceding colours have a dual aspect of "something good, but something evil too". Whereas the aspects of white are pure. Of course, white itself is not actually a colour in itself but, as pointed out in the lyrics, is "the total of all colours". As such, the song contains elements of the music from each of the earlier tracks which provides a nice concluding summary for the album while maintaining a distinct identity of its own.

So what to make of Chromagnitude? Certainly a nice concept and one that is put together nicely playing out as a single piece with recurring themes rather than separate tracks hung together on a rather flimsy skeleton. The playing is great throughout with some great instrumental passages mixed with interesting vocal sections. Certainly the vocals of Baetzel are much better than those of Janacek but the two do blend together well. Overall I am left wondering why I have never come across this band at any point in the past twenty-odd years? I already have an order in for another of their albums which should say something about my opinion of this album!

Hmmm...have you ever bought an album as the cover has caught your eye and you just feel compelled to buy it. Well this was the case for me with this CD. I had a feeling that contained within the CD jewel case was a gem of an album. And I wasn't wrong. This is a diamond of a CD.

This is Solar Project's 7th CD release and is the 1st that I have heard. But it won't be the last CD I buy of them either.

The Solar Project website has this short synopsis of the CD.

'The conceptual album interprets the psychological power of colors, creating a journey into yourself in search for inner peace'

If you like complex then this has it in abundance, it is a grandiose piece of music. There is great mix of Keyboards, Guitars and also Saxophone. The drum's and bass are also used influentially on this CD.

The CD runs to 63:59 so it is not short, but when you listen to the CD in it's entirety its hard to believe that it is that long. It really fly's by, from the first guitar intro of the first song, with great percussion to the last soundscape outro of the last track.

The tracks are certainly all colourful, all the track names are actually colours. With the two longest tracks being Green and Black.

1. GRAY - Lovely start to the CD with the a nice keyboard soundscape with a great guitar lead, This track is a great opener and sets the tone for the rest of the CD. Great melody from guitar and bass with the keyboards keeping up the expanse of the music. Vocals from the drummer Volker Janacek and the vocalist/saxophonist Sandra Baetzael.

2. GREEN - Longest track on the CD at 15:20, dreamy start with a dramatic kick at about 2mins. There is a great guitar/keyboard riff on this track, also a superb Hammond organ sound which Robert Valet plays with great panache. Nice guitar work by Peter Terhoeven. 3rd part of the song has a very space rock sound, great stuff.

3. RED - Acoustic guitar intro before vocals come in, great vocal harmonies from both Volker and Sandra. Short musical interludes between the vocals. Great chorus. Not got the heavy riff's of the previous two tracks, shows off the eclectic sound of this band.

4. BLACK - Amazing start to this track, lovely guitar and percussion, nice and mellow. Lead guitar comes in and carries the melody on. Then there is a powerful dramatic keyboard sound, with the drums pounding in the background. Lovely vocals once again, Sandra has a great voice and really complements the sound well. Song picks up to great effect half way through with some virtuoso space rock keyboard and guitar work. I must admit that this is my favourite track on the CD.

5. BLUE - Very dreamy start to this track, very Roger Waters type phrasing on the vocals. Vocals in the chorus from Sandra. The verse vocals are very lazy and laid back sounding but this adds to the overall sound to this track. Saxophone work is excellent halfway through this track.

6. YELLOW - Eastern feel to this track, great guitar work, song changes halfway through. Feels like two separate songs in one. Different melody and slightly slower rhythm, more spacey sound. Beat really picks up with what seems like a trade mark of this band. Keyboard solo, with guitar in the background. Wah wah guitar in abundance, great sound.

7. WHITE - Last track on this CD, keyboard and guitar intertwining. This takes the CD on a full circle as this track has the great sound of the first track. Here they tell the story of the colours as they sing 'From dismal gray to white'.

Well that is the journey of this great colourful CD complete. I really enjoyed the music, the lyrics, the great guitar/keyboard riffs.

If you like concept albums then give this a play.

Now I am going to hunt for previous work by this band as this has whetted my appetite for more from this band.